Is this what the drinking fountain originally looked like ? Does its country cousin provide the answer?

The 1942 film The Message Must Get Through is the only record of its original appearance we have found. It shows that the Park’s unusual tapering type of Glenfield & Kennedy drinking fountain had some kind of projecting top. What did it look like? If anyone remembers, we’d very much like to hear from you.

Only two other examples of this type still exist, but only one of them still has what could be the same sort of top. It is in Kintore in Aberdeenshire, an appropriate spot for a broad Doric column, where it was photographed by Historic Scotland in 1970. Our thanks to Kenny Thomson of Kintore Community Council who took the coloured ones. It’s not clear exactly how it worked, but presumably water must have come out from the central hole. Perhaps the central cylinder was designed to hold a metal cup? 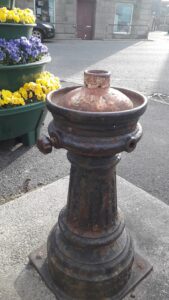 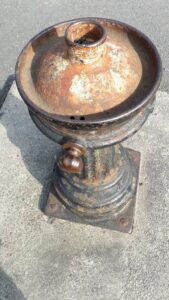 It seems likely that the Park’s fountain dates from 1935, when the nearby Pavilion was built as there’s no mention of it on OS maps until their next edition in the 1940’s.

We have prepared a feasibility study on bringning the fountain back into use. If you recall how Roseburn Park’s drinking fountain originally looked, please contact us at chair@friendsofroseburnpark.org.uk