We only got 20 people rather than the 60 we were expecting (we got 60 last time, two years ago). We shall need to explore why turnout was so poor; it may not be worth doing it again. But those who came enjoyed it. Some asked for the link to the film online; to see it, click here 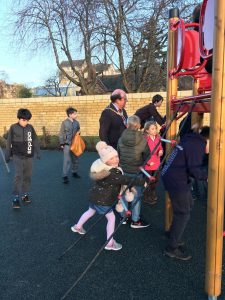 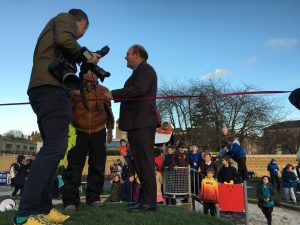 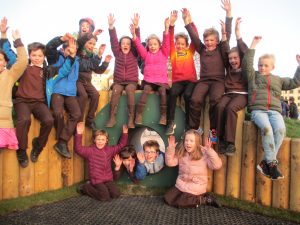 The Lord Provost, Cllr Frank Ross  cut the ribbon to launch the long-awaited Roseburn Play park on 7th Dec 2018. Costing £90,000 and almost 10 years in development, the playpark had been held up by the flood defence works. The old playpark catering for a small age range – kids up to 6 – was worn out and was cold in the shadow of Murrayfield stadium. And the flood defences left it isolated and cut off from the rest of the Park. The new one is at the east entrance of the Park in an open sunny spot, has much more equipment and caters for children up to age 12.

It’s taken a long time and almost didn’t happen. In 2016, the then convener of the Council Environmental Committee, who oversaw the £23M Flood Prevention scheme at Roseburn, Cllr Leslie Hinds, fought to ensure that Roseburn did not lose out in the face of the austerity cuts that were crippling the Council. The West Edinburgh Environmental Sub-Committee stepped in to ensure the playpark was built. Council staff David Sinclair (local Environment Manager) and Ritchie Fraser (Parks officer) worked with Sub-Committee Convener, Cllr Robert Aldridge after the Friends of Roseburn Park (FoRP) made a successful plea for funding to the Sub-Committee in January 2016, to ensure the project went ahead. Council playpark design staff James Galloway and Alan Grevers then worked with Friends of Roseburn Park who brought in the schoolchildren at Roseburn Primary School to help shape the design.

Now, two years on, the work of many has come to fruition and the Friends of Roseburn Park extended a warm wintery welcome to children and their parents to try out the swings and roundabouts on a cold Friday afternoon at 2.30pm. The police were there to stamp bikes with ID badges to help trace them if they get nicked; there were prizes for the quiz asking which bits of the design were from the local kids. MW Groundworks Ltd of West Calder have been working on site for over two months on the build and were pleased with the finished product.

The playpark includes a UniMini Apista climbing frame for kids to age 6, a sand pit, a play mound, a tunnel, a Uniplay Ipex climber for older children, cradle swings for toddlers, a basket swing for tweenies, normal swings, a picnic table, a tunnel, a balance beam, stepping logs, a cone net rotating climber, play boulders* and a stilt walk – all surrounded by a new beech hedge. Residents organised by FoRP have been out planting 5,000 bulbs by the playpark and everywhere else and refreshing the nearby planters to help make the park look beautiful come the spring. The school’s new Head Teacher, Natalie Borrowman, has worked with FoRP and the contractor to get local children involved, the better to create a sense of ownership by the area’s young people, who must help care for the new playpark in the future.

FoRP Chairperson Pete Gregson said “Thanks to the Council, children from Roseburn, Riversdale and Murrayfield now have a new place to go and have fun, get fit and make new friends. This is a key element in helping the area recover from the flood prevention work. It will bring new faces to the park over the years to come. And their parents will have somewhere new to gossip. The Council and the West Neighbourhood Partnership have worked hard with everybody to make this project work. We are truly delighted.”

The children who got the quiz answers right were Lucy Booth, who observed the design was changed to add the tunnel; Lucy has won tickets to the ice rink.

The other big winner was Max Kevios who noted the “birly Thing” aka the cone net rotating climber, was added after various school suggestions; Max won a box game.

.*The Play Boulders were left out due to financial pressures; FoRP are exploring whether they might supply these themselves

Here is the promotional flyer: 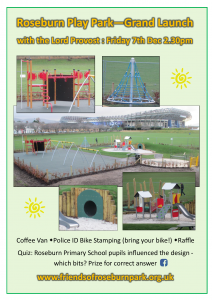 Here is one more photo: