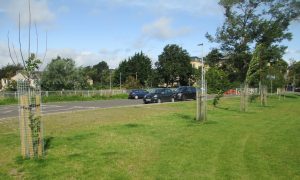 The West Edinburgh Neighbourhood Partnership (part of the Council) has funded 4 replacement trees on the west side of Roseburn park with a grant to FoRP of £586. We added £173 of our own and the local Parks budget put in £105, to meet the total cost of £864. We have got a walnut at either end and a large-leaved lime and black poplar in the middle. It’s very open to the wind here and we hope in due course this line of trees, which will line up with the rowans put in two years ago, will form a wind break.

This was because 8 new trees put here in 2017 were damaged by wind and/ or vandalised so badly they needed replacing. These were trees that were planted by the floodworks contractor, after 30 were felled due to the floodworks prevention programme. There were originally 9 planted at this location.  7 have been damaged/vandalised but our Council Trees and Woodlands Officer, reckons that the originals were planted too close together and were prone to wind blast.

The Trees Officer advised that, given the prominence of the location, replacements need to be standard tree size with a triple stake and cage protection to ensure they get established. The stock grown at the Council nursery was too small for this so we would bought trees in.

The Trees were installed by Tom Dixon of TD Landscaping, the Council’s framework contractor, approved to undertake park tree planting. Volunteer planting was not advised as the ground conditions are quite tough. The flood prevention contractor used this area as their site compound and the ground here is highly compacted due to the heavy equipment and materials stored at this location.

Following our concerns, last November the Tree Officer tried to contact the Project Manager for the flood prevention works and discovered the trees were not covered by the contract for replacements, especially if vandalism involved. In January we met one of the Rangers and discussed budgets.  At that time it was suggested there might be scope for funding from monies left over in 2018/19 budget.  Subsequent discovery that further savings had been demanded in the Parks budget, so no funds were available from this source. In the long term, FoRP anticipates these new trees will become another reason to visit the park.