WW2 ARP MURAL on the ARMOURY

The mural was painted by Zap Graffitti Arts with help from local people and celebrated the construction of the building as an Air Raid Protection centre and the work of the volunteers who kept us safe during WW2.The launch picture features (from R to L): Cllr Frank Ross, Margaret Smith (whose dad was a Warden here), John Shand (in the wheelchair- who had been a messenger boy) with his friend, and Pete Gregson, FoRP Chair. 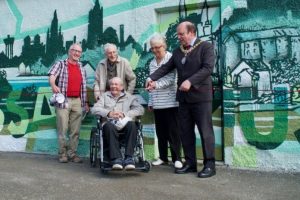 What does the mural mean? On the left hand side, the “W” on the helmet stands for “warden” or fire warden. They ran the show inside the Armoury, co-ordinating messages and action by the emergency services when the city was bombed and were either too old to fight or were volunteers from the “reserved occupations” (eg police). On the right hand side, you can see the messenger boy (usually aged 14-17), who had an “M” on their helmets; their role was to take paper messages to and from the bomb sites.

The top part of the mural shows the streets these youths would travel along; on the left, Corstorphine, on the far right- Haymarket. The road joining the two is the A8. Roseburn is right in the middle of these, above the Armoury door.

Underneath is the cityscape the messenger boys would have seen, as they entered the park from the West, near what is now the ice rink (although during the war that was a munitions dump).

The text at the bottom spells “The message must get through”, which was the motto of the message boys cycling back and fore between wardens and bomb site. It is intentionally illegible in places, showing the challenge of doing just what it says during wartime. A film of the same name was made in the park in 1941-42 and can be seen at https://movingimage.nls.uk/film.cfm?fid=1396&search_term=Roseburn. It was this film that inspired the mural.

Roseburn Park (by Murrayfield Stadium), is so central to the city that during the war it became one of the five locations for the city’s Air Raid Protection against Nazi bombs. Germany dropped over 650 bombs on Edinburgh and the surrounding area and the “Armoury” was built at the beginning of the war to keep us safe. The name was an anomaly, for in reality it housed not weapons, but the volunteers of the City’s civic defence force. Its central location, combined with its easy access from all directions by bicycle, made it the easiest place to get to by messenger youths, sporting a steel helmet, cycling at speed, to relay paper messages from any bombsite to the Armoury, from where the emergency services of ambulances and fire brigade could be co-ordinated.

The work of these civil defence volunteers is commemorated by this mural which was developed in 2019 by Friends of Roseburn Park (FoRP). It is inspired by a short propaganda film made during the war called “The Message Must get Through” that illustrates the teamwork of the messenger youths  (who carried the messages on bikes from all corners of the city when bombs fell) and older men and women inside the Armoury, volunteers who worked in reserved occupations or who were too old to be called up to join the armed forces.

The mural came about when FoRP set out to brighten up their austere windowless Armoury building, which now accommodates them, along with Roseburn Primary School football team, the Murrayfield DAFs Cricket Club and the Edinburgh Wanderers Rugby Club. The Armoury was recently awarded Grade B listed building status on account of its unique heritage- for it is an extremely rare surviving example of a WW2 civil defence building. It also sports, on the north wall, a mural celebrating the diverse users of the Park; that mural too, was painted by Zap back in 20011 with help from local children. [More on that here ]

This time FoRP set out to involve both old and young; following two local screenings of the film, several over-50s participated in the June design workshop and on the 29th, 30th and 31st of August they were joined by pupils from Roseburn Primary, Tynecastle High and Craigmount High schools.

FoRP wanted the mural to celebrate the people who helped keep Edinburgh safe through that terrible time, the deadliest conflict in human history. The new mural was funded through a Council grant from the “Local Event Fund” and has involved local residents in its design through screenings and workshops.

NOTE: The Armoury one of the five  purpose-built  area ARP Report Centres in the city,  almost all of them located in parks.  They were designed by the City Architect and built by James Miller & Co following instructions in 1941 from the Ministry of Civil Defence, after it became obvious that what had been done at the outbreak of WW2, converting parts of schools for the purpose,  wasn’t working.   It is the only surviving example of any form of WW2 ARP centre in Scotland; there are also only one or two of this type left in England.

Around 55 people were involved in this project and its production over one month in August.  They were: (with ages- it was intergenerational, and spanned from 11 to 75)

At the launch  With help from Richard Gregson, Laura Howarth, Barbara Knowles, Jennie O-Reilly, Saughton Rec (for the Gazebo), Murrayfield Dafs and Edinburgh Wanderers (for use of their Armoury rooms, electricity, Urn), Cllr Frank Ross, Lord Provost (for cutting the ribbon)

Media Coverage Evening News Sat 31st August  and in the Edinburgh Reporter Sun 1st September in the morning  and after the event, in the afternoon

How it was done

The survey on what residents wanted for the mural was run in April & May- the results are available. Click here to view them The design workshop took place on June 15th.

Here is a picture of the workshop group at the armoury exploring the options, against the west wall, which will see the major work taking place. On the left is Jane Wood, Keiran Gorman of Zap Graffitti Arts and Paul Harding. (Other participants, not in the picture, were Alex Dickson and Pete Gregson). 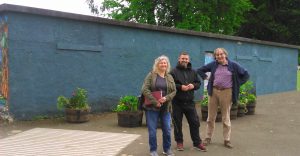 The Armoury in Roseburn Park was built as a signals report centre for WW2, as part of Air Raid Protection (ARP) measures for civilians against Nazi bombs. Its history came to light a few years ago when Friends of Rosebun Park (FoRP) uncovered a documentary made during the war featuring the building. The film, entitled “The Message Must Get Through” shows how the Armoury served as the nerve centre for squaddies on bikes coming from all parts of the city. In pre-internet days, when even the telephone service was relatively new, messages were carried by hand. Cycling found huge favour in the 30s with cycling clubs established throughout the land and so it was only natural that it became the most reliable and economical way for soldiers to bring messages of bombs hitting Edinburgh, the better to co-ordinate emergency measures. Rosburn Park, then as now, was easily accessible by bike and this location was the natural choice to build a report centre for ARP measures. It may be that this particular site was chosen under the trees to help protect it from Luftwaffe spyplanes and bombers.

The Armoury is of national significance, because it’s the only surviving example in Scotland of an ARP HQ building.

The survey FoRP carried out in 2016 is available here. It asked residents what they wanted to see in the park, and FoRP have been addressing those suggestions which found favour. Twelfth on the list was “Sculpture trail or other improvements along the river “corridor” from Roseburn to Saughton Park” – this drew 67% who loved or liked the idea, with 26% saying they didn’t mind it. Only 7% doubted or disliked the idea.

When the Council announced it was seeking bids to its local events fund in January, FoRP thought a mural like this would reflect the building’s uniquely well-documented history. A grant was secured of £3,000 for a mural on the Armoury wall(s), to be produced by ZAP Graffitti of Liverpool. The artist, Kieran Gorman, did the FoRP mural on the north Armoury wall with young people back in 2012. He is from Livingston and lived in Roseburn before moving south. Kieran worked in August 2019 with both old and young on this project (with the accent being on those aged 50+). The design was based on the survey results (see above).

The film can be seen on the National Library of Scotland Museum of the Moving Image website here. FoRP organised a local screening on Sunday 12th May at the Masonic Lodge of Brotherly Love,  5 Roseburn Gardens, EH12 5NJ. Art et Facts at 19 Roseburn Terrace assisted in giving out tickets.

There had been a previous outdoor screening in December at our carol singing event.

FoRP consulted the community as to which walls on the Armoury should be muralised and what the designs should feature. The detail was then worked out at a brainstorming workshop to be held in Roseburn, on Sat 15th June.

The mural was produced over the summer and launched on the 1st September, to mark the 80th anniversary of the declaration of WW2 and the 74th anniversary of its conclusion, six years later. We wanted the mural to celebrate the people who helped keep Edinburgh safe through that terrible time, the deadliest conflict in human history. That is, what they did in and around the Armoury – and why and how they did those things, to help us survive the air raids. Read more about Air Raid Precautions in the UK in WW2 here

Consultation was done primarily through a survey of views, both online and using paper forms. The big questions were – which wall(s) do we want the mural on? Do we want it in black and white, sepia or in colour? Do we want several discrete images or one big image or a big image with different parts (like the existing mural)?

The survey ran from 19th April and closed on the 12th June and for the results, click here to view them . They were published  on the 14th June on the FoRP website, on our Facebook page, at the workshop and at the Murrayfield Community Council meeting on the 25th June. 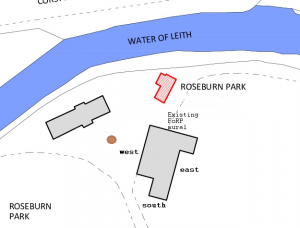